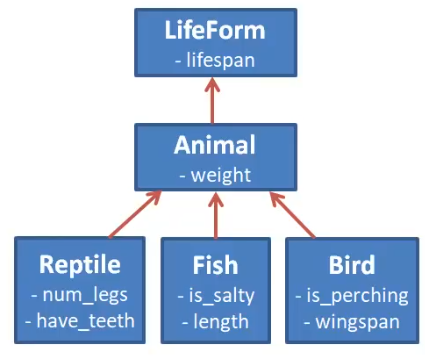 We’ve talked about many of Python Basics in the previous articles, such as List, Dictionaries, and we’ve even practiced with some Python Projects For Beginners. In this article we’re going to cover object-oriented programming in Python, we’ll cover classes objects inheritance and other related concepts. First, we’ll explain some concepts of object-oriented programming. Then we actually have some code that we’ll walkthrough which will make it a lot clearer how these actually work.

There are three main (concepts) cornerstones in Python ObjectOriented Programming. These encapsulation, inheritance, and polymorphism.

Classes and Inheritance : abstraction and polymorphism

Classes and Inheritance : Learn By Coding

These are some advantages of object-oriented programming, now let’s look at some code examples to learn how it works. We’re going to start with a shape class

We have class shape and a colon, then within that, we have different functions. I started by writing an init function that is a constructor. We always have the first parameterself Then we want to pass in a color, if no color is passed in, it will assign none to color but hopefully, somebody will pass in a color to the constructor when they create a new shape.

Classes and Inheritance : learn with code

There’s one function in here: get color. All it does is return the color. So every shape has a color. We also have a two-string __str __ is the Python’s string method. In other words, it returns a string representation of a shape. We can define that to be whatever we want. What we’re going to return is just a color then word shape. That’s it, we returned this string that is our string representation of shape.

For a lot of classes you write, you’ll probably want to have a two-string method. it returns some sort of string representation of the class.

To use our shape class, we can just have shape equals shape and then in parenthesis. We’re going to pass in the string red which is our color. We haven’t said what kind of shape this is yet. But we don’t have to at this point, because the shape is just a generic parent class.

Then we can print “shape is” shape get color using our variable here, our instance variable which is called shape, with the lowercase s, we can call the methods of the shape class, and we’re going to get the color of this shape that we instantiated.

This shape of the capital S, basically calls the constructor or the init function within the shape class and passes in the variable read the string red so that’s it it’s pretty simple.

Let’s run that and then you can see it should print out red shape.

That concludes this article on Python object-oriented. I hope this has been helpful. Please help me by sharing this article with your friends and on social media.

Check out my Python For Beginners course to master the basics of Python quickly and efficiently. And follow me on Twitter for your daily update on Python and Data related free content.